Wichita’s McGinty Machine is 64 years old, and Mike McGinty has run the business for exactly half that time. The burly Kansas native inherited the drill and press shop from his father in 1980, which happened to be the same year the industry’s fortunes changed forever.

The 1970s were a golden era for Wichita’s general aviation companies, with overall deliveries by US manufacturers peaking in 1978 at more than 17,800. In less than two years, however, the general aviation boom had ended. 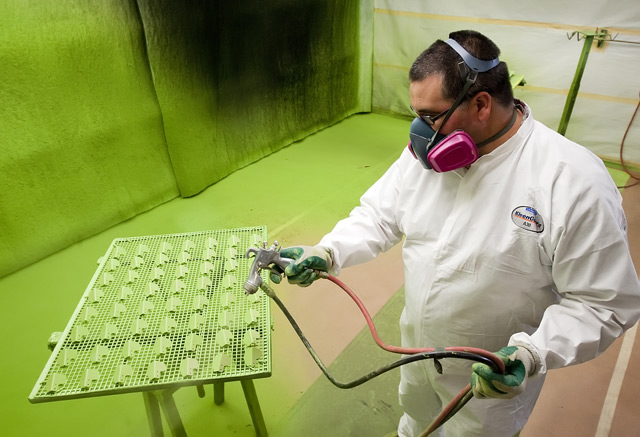 “We were 95% Cessna at the time,” he recalls, 32 years later. “I got a notice from Cessna. It said: ‘Stop all work’.”Shipments dropped almost by half to about 9,400 by 1981, then halved again in 1982 and continued falling for the rest of the decade. McGinty Machine and its like were right in the middle of it. Like most Wichita suppliers at that time, McGinty was tied almost exclusively to a single manufacturer.

It is not an uncommon notice in the boom-and-bust cycle of Wichita’s aviation cluster. Survival does not depend on avoiding the bust years, which are seemingly inevitable, but on the degree to which the suppliers can adapt and diversify – just like McGinty Machine.

The business launched in McGinty senior’s Wichita garage in 1948 had grown fairly prosperous by 1980, but the sudden downturn had caught virtually everyone by surprise. For McGinty Machine’s new owner, the finances looked bleak.

Hard times teach bitter lessons, and one that McGinty remembers from that period is typical: he should have fired more of his staff.

“I was a rookie at it. I tried not to lay off people,” he says. “But business has to make a profit, so I probably kept people on longer than I should have. It made it harder for us to come back. I’ve learned since.”

The general aviation market never recovered its 1970s-era form. Deliveries steadily dwindled to a low of 928 by 1994, less than 6% of its peak 16 years earlier, albeit of a more valuable mix of mostly turbine-powered aircraft, according to the General Aviation Manufacturers Association. Seventeen years later, general aviation shipments by US airframers had barely recovered, with only 1,215 reported industry-wide in the USA in 2011.

Like any of Wichita’s surviving suppliers, McGinty Machine got through that downturn and others by diversifying its customers and increasing the level of its sophistication. Even in the depths of the early-1980s recessions, McGinty invested in new and more advanced tooling machines and drills. Eventually, other clients placed orders. First, it was Boeing‘s commercial division in Wichita, which is now Spirit AeroSystems. As Spirit AeroSystems has diversified since it was established in 2005, so has McGinty’s order book. He now builds parts for Airbus, Gulfstream and Sikorsky, but delivers them to Spirit AeroSystems’ sprawling factory complex.

McGinty Machine is mostly known as a shop that specialises in building parts on quick turn-arounds, also known as a “blue streak” line of business. “If you want to talk about stress, this is the stress job,” he says. On-demand, quick-turnaround jobs remain a competitive strength in the Wichita cluster, even if the materials involved are more typically outsourced for serial production in lower-cost areas of the world.

McGinty plans to expand and enlarge his business by opening a new factory in Wichita next year aimed at supporting serial production of aircraft parts. “On the production side our niche is going to be stringers, seat tracks, beams and longer parts,” he says. “That’s what our core competency is going to be.”

The general aviation sector has been in a profound slump since deliveries last peaked in 2007, and McGinty’s business has suffered proportionately. But, like many suppliers in Wichita, he senses a shift in the winds, and is preparing for it. From July to September, McGinty increased his payroll from 30 to 42.

All distances on the Great Plains are measured in minutes instead of miles, and it is a 10min drive downWest Kellogg Street – an expressway that divides Wichita’s north and south districts – to another family-owned aerospace machining shop, one of dozens dotting the city.

Randall Voegeli founded Exacta Aerospace in 1978, and turned the day-to-day operations of the business over to his sons, Ben and Casey, in recent years. Exacta opened when Randall Voegeli was still working at Learjet, with a shed equipped with a Bridgeport milling machine. It now produces more than 4,500 different parts a year for Cessna and Boeing Commercial Airplanes.

The role of companies like Exacta in the supply chain is rapidly evolving. It is no longer enough for a Wichita-based machining shop to simply build a small metal part, which is then shipped out to be attached to slightly larger parts. Original equipment manufacturers (OEMs) want these kinds of shops to move up the supply chain, integrating several parts into a single assembly.

At Exacta, for example, Casey Voegeli shows a fan cowl assembly for the Rolls-Royce Trent 1000, one of two engine types that power the Boeing 787.

“An assembly like that – it’s a nice size, but that’s going to get attached to something else. It’s going to grow from there,” Voegeli says. Exacta wants to keep growing along with the assembly.

Exacta started to move into the assembly business almost 20 years ago, well before many of its peers started making the transition.

“That kind of got us thinking: ‘If we are doing this, and no one else is doing it, maybe we need to put more focus on assembly,’,” Voegeli recalls. “Then our thought became, who is going to control the assembly? Because assembly is a lot harder to [transfer to another supplier] than a part is. So the bigger the assembly the harder it would be to move that statement of work.”

Exacta pursued its strategy first by training its workforce in the 1990s. Certification courses for new skills, such as applying sealants, were taught by Boeing’s commercial division in Wichita, which is now Spirit AeroSystems. In 2005, Exacta purchased a new, larger building and moved in. The owners purposely left a new area of the factory open, simply to show potential customers they had room to assemble large parts.

The moves have kept Exacta competitive, but the owners still worry if they are moving fast enough.

The same trend holds true among the city’s metal processing shops, a close-knit web of firms specialising in treating materials in the process of manufacturing. Metal Finishing (MFCO), located on the banks of the Arkansas river that cuts through the western half of Wichita, started out as an specialist in anodising, a process used to make aluminium more resistant to corrosion and harder to damage.

“What we’ve done is we’ve gone from simply anodising the part to the first step, which was: ‘Let’s put in a paint shop, let’s prime.’ Now we’ve gone to part-marking. Now we’ve gone to top-coat. We’ve evolved that way,” says Ed Ball, vice-president of sales and marketing.

There are probably a dozen metal processing companies in Wichita, each with a specialised niche. Handshake agreements between companies dating back decades have set certain boundaries. It is okay for a company such as MFCO to specialise in processing, but heat-treating is left to other firms.

Globalisation, however, is creating opportunities for companies to re-examine their roles. MFCO, for example, has established a facility in Chihuahua City, Mexico, where it combines aluminium processing with heat-treating. But the company’s core business remains in Wichita. Processing costs may be lower in other places, but the level of skill is more difficult to duplicate.

“You can’t go to class and you can’t learn [metal processing skills],” Ball says. “You can learn the principles, but to actually do it on a line? It’s a skill that is learned through doing it. It’s like our hard-chrome shop. You wouldn’t believe the weird things they do to make things work. You’re following a specification. You’re following a technique – but you have to tweak things.”