“Since January 2011, Lt. Gov. Colyer and I have worked with the Kansas Legislature to make the state’s tax code fairer, flatter, and simpler for families and small businesses,” Gov. Brownback said. “This approach broadens the base and lowers tax rates for the benefit of the maximum number of Kansans. The result has been three years of historic and innovative tax relief. Our pro-growth tax policies will pave the way for Kansas to be the best place in America to raise a family and grow a business. Simply put, Kansas is open for business!”

On July 1, 2013, the sales tax rate will go down from 6.3 percent to 6.15, saving Kansas taxpayers nearly $64.4 million more per year. At that time the Rural Opportunity Zone that uses income tax credits and student loan payback incentives to attract new residents to counties suffering from declining populations will expand from 50 to 73 counties.

The net impact of the tax reform enacted during the last two sessions will bring six years of tax relief totaling $4.1 billion.

“This pro-growth tax policy will leave $4.1 billion in the pockets of Kansas tax payers to save, invest and spend as they see fit,” Lt. Gov. Colyer said. “With this new tax policy we have already seen 7,700 new jobs in the Kansas City area, and the number of jobs and opportunities for Kansans will continue to increase for generations.”

The Governor signed the bill at the Prairiefire Development in Overland Park and McGinty Machine in Wichita. 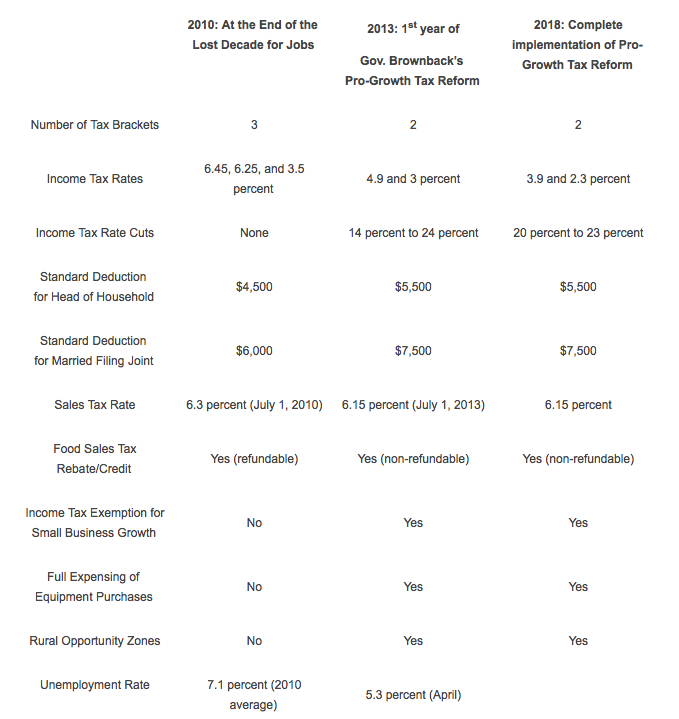