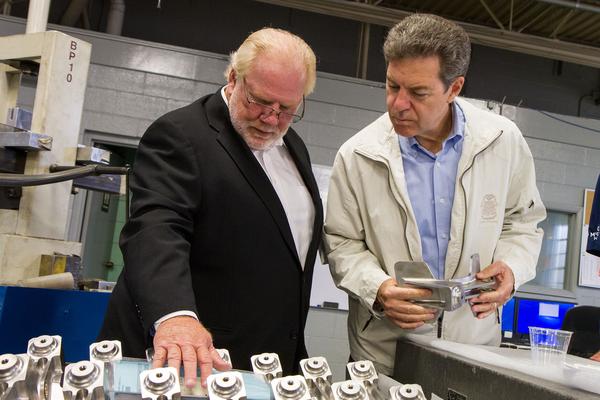 As Gov. Sam Brownback walked through McGinty Machine Co. on Friday morning, he learned about what that company is doing to expand its parts-making capacities.

Brownback learned about new equipment that McGinty has added recently and about other new additions that are forthcoming. He saw the parts that McGinty makes for aerospace companies, such as the BoeingCo. and Spirit AeroSystems Inc. He shook hands with McGinty employees.

For Don McGinty, owner of his namesake company, having the governor tour his facility was his way of highlighting how changes in the state’s tax structure are helping businesses like his grow.

The Wichita Business Journal was the only local media outlet that accompanied Brownback on his tour of McGinty Machine on Friday.

In a July story, Don McGinty said he wouldn’t have been able to spend millions of dollars to expand his company’s physical space and increase its equipment capacity without Brownback’s tax cuts.

He emphasized as much again on Friday.

McGinty says the company will benefit for years to come from the investments that have been made now in expanded parts and service capabilities.

McGinty says his company has spent $4 million over the past two years in expanding capacities. Another $3.25 million will be spent this year in new equipment, and another $1 million is planned for 2015, McGinty says.

The business has expanded its manufacturing space to about 100,000 square feet.

McGinty Machine has grown from a staff of 26 five years ago to 52 now and is adding five to 10 more in the coming months.

Brownback says McGinty Machine is an example of his tax policy at work.

Brownback’s tax reform plan was enacted in 2011 and lowered income tax rates and eliminated state income tax on most income for small businesses.

Brownback says because of that plan small business owners, like McGinty, have more money to re-invest into their businesses.

Brownback says he is seeing examples of that happening across the state, which is helping to create new jobs.

“That’s how we are growing business,” Brownback says. “The key to it is having guys like Don to go out and get the business and invest the capital.

“This is a tangible example of what the tax policy produces.”