Where are Wichita’s jobs? 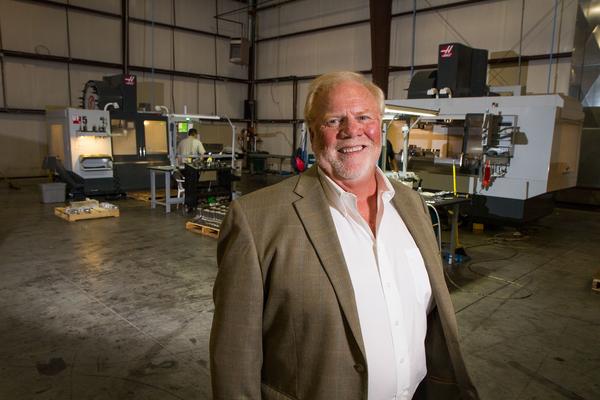 McGinty Machine Co. Inc. has invested about $3 million expanding its manufacturing space to about 100,000 square feet. Owner Don McGinty anticipates another $2 million yet to come.

The Wichita-based aerospace supply company has hired 15 people over the past year. More hires are expected as the business continues to grow.

Don McGinty says his business likely wouldn’t have been able to expand were it not for Gov. Sam Brownback’s tax cuts.

“It makes for a friendlier environment, that’s for sure,” McGinty says.

Other local small businesses are in growth mode as well with some companies, such as Davis-Moore Auto Group and Excel Industries Inc., touting projections of 20 percent growth this year.

Those are the local cases where small business growth is being aided by Brownback’s tax reform plan — enacted in 2011 — that lowered income tax rates and eliminated state income tax on most income for small businesses.

The ongoing layoffs and job losses at Wichita’s struggling plane makers — about 30,000 jobs lost in the local economy since the 2008 recession — are holding any local job growth back. Smaller businesses cannot overcome those job losses when they are only adding a few people at a time — if they are even hiring at all.

The commercial aviation market has continued to grow, but the small and mid-size business jets, which are a Wichita specialty, have remained the most sluggish segment of the aerospace industry.

The problem begins with a lack of economic diversity: Wichita still has all its eggs in the aviation manufacturing basket.

“When that sector hasn’t recovered nationally, that really drags down the south central Kansas economy,” says Jason Watkins, director of government affairs for the Wichita Metro Chamber of Commerce.

Some say a stagnant local jobs market is all the more reason to pursue economic diversification.

Wichita State University President John Bardo is among those who are aggressively working on ways to aid in the creation of jobs through a planned innovation campus at WSU. The goal is to help companies bring products to market quicker.

“What we are trying to do is to broaden the base,” Bardo says.

He sees jobs-creation opportunities with the technology, health care and logistics industries because of existing and emerging companies within those sectors.

City leaders also have been discussing the possibility of establishing an $80 million jobs fund that could be used for, among other things, jobs creation and helping companies to expand.

Wichita City Council member Janet Miller says talk of diversifying the local economy has ratcheted up recently because of aviation sales sluggishness and the 30,000 jobs it claimed.

“I think it’s clear given the changing nature of aviation manufacturing that we really need to focus on diversifying our jobs base,” Miller says. “It will require a coordinated effort and money to make it happen.”

She says diversifying the economy can no longer be left to the free market alone. The effort, Miller says, also requires analysis of the skills, capacity and resources the city has in order to capitalize on sectors outside of aviation.

The city’s 50 largest employers posted anet jobs loss of 6.8 percent over the past year, based on information compiled for the Wichita Business Journal’s employers list.

Of the 50 companies on the list, 19 reported higher employment totals over a year ago. Another 19 companies had fewer employees than they did a year ago. Six were flat to last year.

Manufacturing in general was one of the stronger industry sectors, according to WBJ data. AGCO Corp., for example, increased its number of full-time employees by 90 over the past year. Public school districts generally fared well, too. USD 259 Wichita and USD 385 were among those posting the largest jobs increases, with 124 and 100 more employees, respectively.

Koch Industries Inc. grew its local employment by 400 people, marking the largest year-over-year increase locally. That bumped Koch up from No. 10 on the 2013 list to No. 6 this year.

Textron Aviation, the parent company of Wichita’s Cessna Aircraft Co. andBeechcraft Corp., did not respond to repeated requests for employment totals. The two companies were merged following the Textron Inc. purchase of Beechcraft.

Cessna ranked fifth on the 2013 employers list with 4,979 employees. Beechcraft was eighth with 3,372. Also absent from this year’s list is Boeing Defense, Space & Security, which in May ended its aircraft modification operations in Wichita. The company reported 1,000 local jobs last year.

If those companies were excluded from the 2013 WBJ employers list, the city would have actually posted a 6.1 percent increase in the number of full-time employees in 2014.

Brownback’s tax plan was billed as an immediate economic fix.

And there’s been a small increase in jobs statewide. A June report from the Kansas Department of Labor shows 16,700 jobs were added statewide for a year-over year increase of 1.2 percent. About 8,600 private-sector jobs were added in Kansas between May and June, the Labor Department data show.

But Wichita isn’t creating any jobs.

The total number of jobs in the Wichita metro area was about 1,500 less than in the June of 2013, according to the Labor Department report.

Supporters say the statewide employment numbers are evidence that Brownback’s tax plan can work to create jobs; it just needs more time for the trumpeted benefits to be seen.

Jeremy Hill, director of the Center for Economic Development and Business Research at Wichita State University, says tax-cut policies in general need more time to work, especially with regard to the formation of new businesses.

Owners and operators, he says, need time to ratchet up hiring. Hill says the statewide labor numbers are an indication that jobs creation is moving in the right direction.

But more can be done, he says.

“The intent is to encourage business formation, which we are really low at,” Hill says. Another component, Hill says, is to help existing businesses grow.