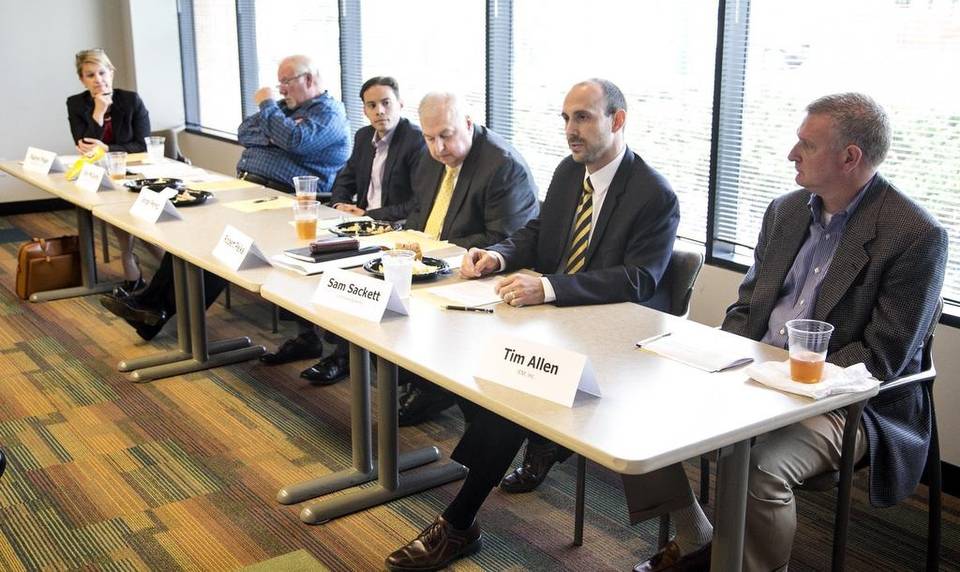 BY JERRY SIEBENMARK
The Wichita Eagle

The Export-Import Bank is a key part of area companies’ export strategy, and reauthorization of the bank by Congress is necessary for future growth.

That was the message delivered by representatives from companies participating in a panel discussion on the controversial government agency Friday at the Wichita Metro Chamber of Commerce.

The charter of the 81-year-old Export-Import Bank expires June 30. It has become one of several government programs in Washington that has been targeted by conservative Republicans who say it unfairly aids some businesses at taxpayers’ expense.

The bank, which supports itself through interest and fees on its loans and services, helps U.S. companies that depend on exports by guaranteeing loans and providing credit insurance to overseas buyers of American products.

Representatives of Spirit AeroSystems in Wichita, ICM in Colwich and GE Aviation in Arkansas City, voiced their support for the work conducted by the bank. The panel was sponsored by the chamber’s government relations committee and moderated by Karyn Page, chief executive of Kansas Global Trade Services.

Sam Sackett, senior manager of Spirit’s global communications and government relations, said while his company doesn’t directly work with and use the bank, its largest customer, Boeing, does.

“Fewer foreign sales for our customer means less demand for the products we build here in Kansas” such as the fuselage of the Boeing 737 and major parts of all its other commercial airliners including the 747, 777 and 787. He said the bank facilitates the sale of Boeing aircraft to airlines overseas – sales that account for a big part of its aircraft orders.

“Anything that enables more aircraft sales to foreign markets really levels the playing field (with foreign competitors whose governments have their own versions of an Export-Import Bank),” Sackett said. “That’s the bottom line.”

Jorge Perez, GE Aviation plant manager, said growth for his company and his plant is mostly coming from overseas. He said 58 percent of the Arkansas City site’s revenue is from customers outside the U.S. and almost half of the work the 700-employee plant does overhauling commercial jet engines comes from overseas.

Tim Allen, vice president of finance for ethanol-plant designer ICM, said a few years ago the company decided to pursue work outside of the U.S., and identified South America as having great potential for business. Allen said ICM found a customer in Paraguay, but the customer couldn’t get financing from banks in its country.

That’s when ICM turned to Ex-Im to help save the deal.

“It was a small, eight-figure sale, but the profits paid Kansas wages and income tax,” Allen said.

He added ICM is working on some potential deals with foreign companies “provided we can keep Ex-Im in place.”

“If we don’t get Ex-Im reauthorized … it will slow us down quite a bit,” Allen said.

Don McGinty, who was representing small businesses on the panel and is owner of McGinty Machine Co., which makes parts for aircraft manufacturers, said he didn’t understand why Ex-Im’s reauthorization was even in question.

“We have to ask the question: Why is this an issue?” McGinty said. “Because from a business standpoint, I can’t see the issue. There’s no reason to be shutting down a successful program. When the Export-Import bank is making a profit, and running as efficiently as it is running today, that’s a good business.”

Ex-Im has come under fire from conservative groups such as the Heritage Foundation, which argue the agency assists one-half of 1 percent of all U.S. small businesses, and 98 percent of all U.S. exports are accomplished without Ex-Im subsidies. The companies that benefit from are multinational firms, they say, that could access private financing to support their export business.

But Robert Pelka, vice president of Wells Fargo’s global banking unit in Minneapolis and who also participated in the panel discussion, said there are many instances where his bank can’t finance a customer’s export sale, either because of the terms of the deal or the risk involved. He said many times he calls on Ex-Im to help with customers’ export deals because Wells Fargo can’t do it alone.

“Believe me, if we could to a transaction without Ex-Im Bank, we would,” Pelka said.

U.S. Rep. Mike Pompeo, R-Wichita, who was not at Friday’s meeting, opposes “the current version of the Export-Import Bank,” he told The Eagle in an April interview.

Pompeo was not available for comment Friday, and a spokeswoman for his office stand he stands by his earlier comments.

Pompeo said in the April interview that he opposed reauthorization of the bank without major changes because the program es “puts taxpayers at enormous financial risk.”

“When the loans go bad, that’s who pays for the default,” he said in the interview.

He said at the time there were a number of proposals being worked on in Congress that would shift the liability for bad loans away from the federal government.

He said he also thought the private sector could step in and provide the financing should the Export-Import Bank reauthorization fail.

Article originally published in The Wichita Eagle and kansas.com on Sat., May 30, 2015.