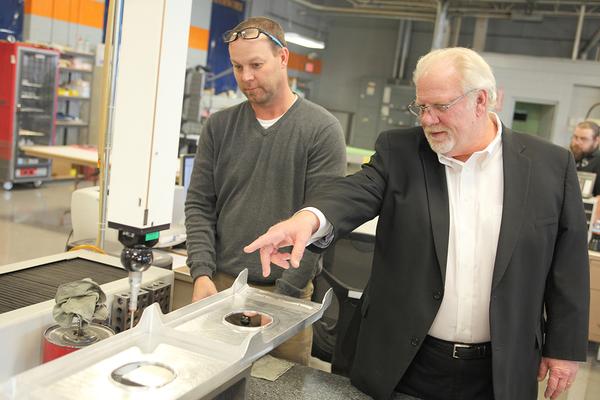 Don McGinty competes in the volatile world of aviation exporting.

“We’ve been on and off for the last 10 years,” says the president of McGinty Machine in Wichita. “The last two to four years, it’s been stable and increased a little bit.”

But tomorrow could be different, he says.

“Right now, they’re buying more parts so we’re good,” McGinty says. “Next week, we might be completely down.”

That’s why the South Central Kansas Regional Export Plan has been implemented, providing companies a single access point to a system of exporting resources and tools.

“All companies must comply with export, industry and foreign relations,” Page says, “but aviation subcontractors may have the additional burden of complying with International Traffic in Arms regulations. We help companies work through that process every day.”

And companies like McGinty Machine have a built-in advantage, Page says: They’re already selling to OEMs in the United States.

“And if they are meeting standards of the best aviation manufacturers in the world, they can meet the standards of foreign companies,” she says.

“We feel strongly that aviation subcontractors have excellent growth potential.”

McGinty says his firm has benefitted from word-of-mouth overseas.

“We’re doing work for Boeing, Spirit and all the majors and sometimes we send stuff overseas to them, so we send our name at the same time,” he says. “Quality, that word and being in business for so long has helped.”He hopes to grow the company’s exporting business.

“It’s volatile,” he says. “There’s so much slow business in the United States that we need to go overseas but it’s tough. Canada is a good marketplace and there’s no communication barrier so it’s easier to work there.”

If Congress restores the Ex-Im Bank charter, such exporting forays will be easier to finance, McGinty says.

“Right now, that’s causing some problems for small business because it’s not renewed,” he says.”Boeing, GE, companies in every state rely on them to get financing. Unless you’re supported by the Ex-Im Bank overseas, you can’t borrow on accounts receivable. That hurts our ability to grow and pay our bills.”