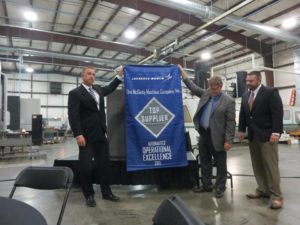 From left, Scott Dobbs, Terry Williams and Michael Barker, all of Lockheed Martin in Fort Worth, unfurl a banner they presented Tuesday to McGinty Machine Co. for receiving the defense contractor’s Top 25 Supplier award for 2015. Photo by Jerry Siebenmark, The Wichita Eagle

Defense contractor Lockheed Martin has recognized McGinty Machine Co. as one of its Top 25 Suppliers for 2015.

At a ceremony Tuesday at McGinty’s Plant II at Douglas and Hydraulic, five officials from Lockheed’s Fort Worth operations presented owner Don McGinty a banner noting the award.

Dan Pleshko, Lockheed’s vice president of procurement and supply chain services, said this year’s top supplier recognition was special because it has been more than a decade since his company has recognized the top 1 percent of its roughly 2,500 suppliers.

“We sort of lost our way in recognizing suppliers,” Pleshko said, adding that Lockheed revived the program as a way to provide an incentive to its best performing suppliers.

“We’re committed. We’re going to keep this up every year.”

He said the Top 25 award is for suppliers that consistently deliver quality parts on time. The award also recognizes other factors such as the ease of working with the supplier, the alignment of the supplier’s values with Lockheed, and the supplier’s ability to solve problems for Lockheed.

McGinty said his 62-employee company has been a supplier to Lockheed for about 15 years, supplying parts for aircraft including the F-22 Raptor and F-35 Lightning II fighter jets and the C-130 cargo airplane.