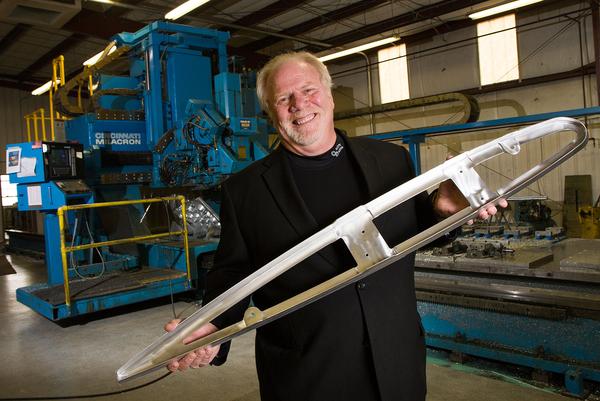 For Don McGinty, it’s hard to remember a time that family’s machine shop wasn’t a part of his life.

The Wichita company, McGinty Machine Co. Inc., got its official start in 1948 when it was founded by McGinty’s father, John McGinty, and his uncle, Clarence “Shorty” McGinty.

The latter originally started working out his garage with a few pieces of equipment in the mid-1940s, and when his brother returned from a stint in California with Lockheed Martin Corp. a family business now nearing its seventh decade of operation began.

For young Don McGinty, the family business was almost like a family member.

“It’d get talked about at the dinner table,” he says. “Whether business was good or bad, whether we might have to tighten our belts a little.”

Don McGinty has been company president since the 1980s — but he cut his teeth in the family business long before returning from Houston to Wichita to take it over.

He started doing odd jobs around the shop at 10, and over the years he learned the ins and outs by holding positions throughout the company — from parts making to office work.

But some things have always stayed the same, such as the emphasis now generations-long that has been put on customer relations.

Putting customers first by going above and beyond to meet their needs has been a key to the company’s success and led to facilities growth and hiring in recent years, McGinty says.

There has also been a benefit of having the McGinty name outside on the building and a McGinty guiding the business for so long.

McGinty recalls Cessna Aircraft Co. business drying up soon after he took over. There were times, he says, that he and his wife would forgo paychecks to make sure the company met payroll.

But in time — thanks to the continual push for new technology, the customer-first approach and a team mentality within the workforce — the company has been able to build a diversified portfolio and provide a livelihood for hundreds of employees over the years.

Many of whom — including several from the days McGinty’s father and uncle ran the business — went on to start their own businesses in the Air Capital.

But, he says, looking at what the family business has become today, McGinty believes his dad would approve.