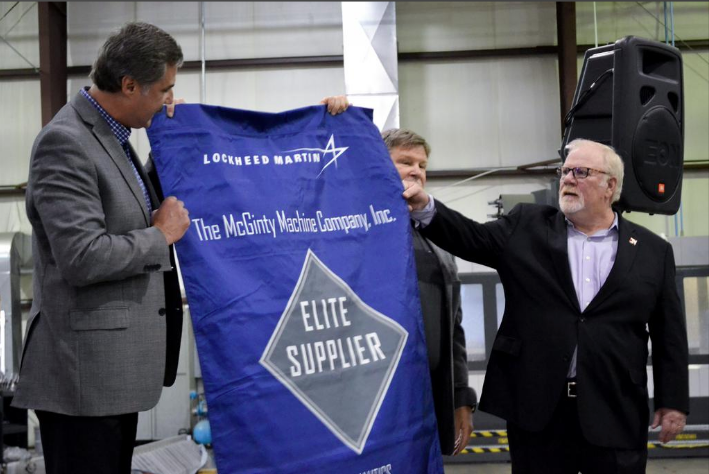 McGinty Machine Co. Inc. in Wichita was recognized Wednesday with an elite supplier award from Lockheed Martin Corp. for 2017, landing the local business in the top 2 percent of the defense contractor’s sprawling supply chain.

“This is a big day for McGinty Machine Co.,” president Don McGinty said Wednesday at an award ceremony at the company’s facility at 123 N. Hydraulic. “I can’t tell you how much this is a team effort.”

The event was attended by local officials and company employees, with McGinty saying many of his 55-person staff have been with him for more than 20 years.

The company was started in 1948 by McGinty’s father and uncle and has had work on Lockheed (NYSE: LMT) programs since McGinty became president in the 1980s.

And it’s been the company’s performance on those programs that helped it become one of only 23 Lockheed supply shops out of 1,400 production suppliers to earn the elite status for 2017.

“It’s that standard of excellence that we are so proud that you’ve achieved,” Wichita Mayor Jeff Longwell told the assembled workers.

The bar for that level of excellence is high, said Mark Miller, director of airframe procurement at Lockheed. And McGinty reached it by delivering 100 percent on-time with 100 percent quality last year.

“That’s pretty much perfection,” he said.

McGinty was also an elite supplier winner in 2015.

Miller, who was joined at the event by other Lockheed representatives, said that kind of continued excellence is critical to its operations, particularly as rates ramp up on the F-35.

In his remarks to the crowd, Miller said that operational excellence is a key tenet of Lockheed’s business model.

But he also noted what that means — that the men and women helping keep America and its allies safe have the absolutely best and safest aircraft possible for that mission.

“It’s something to be very proud of in my mind,” Miller said. “What you are doing here … it goes into something much bigger and very important.”